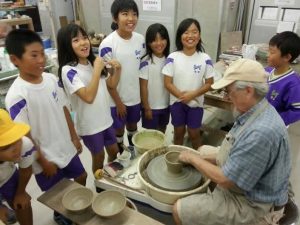 Glenn Lewis was born in Chemainus, British Columbia in 1935. He studied at the Vancouver School of Art, obtaining an Honours degree in 1958. He then obtained a teaching degree from the University of British Columbia in 1959. He continued his studies under Bernard Leach, the artist-potter in Cornwall, England from 1961 to 1963. He then founded a pottery in 1964, Longlands, with John Reeve in Hennock, Devon, but in the same year left to teach ceramics in the Education Faculty, 1964-67, and the Fine Arts Department, 1971-74, at the University of British Columbia with a break as Visiting Professor in 1970-71, to teach in undergraduate and masters programs, New York State College of Ceramics, Alfred University, Alfred, N.Y. Although an intensely important part of his artistic repertoire, his work with traditional pottery evolved with an interest in the progressive avant-garde in the 1960s, with conceptual and performance art. Always questioning the dialectic between conventional objects and art, social obligation and natural instinct, function and wonder, his past experience with sculpture was important in his new projects.

Much of his work between the 1960s and the 1980s included some aspect of sculpture or positioning as a questioning of the dichotomy between the static and the transient. He was fascinated with seeking commonality and human links revealed by conventional items and popular myth. He worked with photography, film, video, and performance, becoming increasingly interested in nature and topiary. He was involved in a number of artists’ collectives and artist-run centres, which included Intermedia, the New Era Social Club in 1968 and the Western Front in 1973 as one of its founders. Many of his works were collaborative and included members of these collectives, often questioning the perception of reality by a public manipulated by the media. Much of this work became known as conceptual art. New media in all types became the catalyst for much of his work through the 80s, an investigation into its power to influence and broadcast, and yet limit perception at the same time. He was awarded with 5 Canada Council grants throughout this period. His attention to new media eventually led to his appointment as Head of Media Arts at the Canada Council in 1987 until 1990 and was awarded the prestigious “Emily” award from the Emily Carr Institute of Art and Design in 2000. From 1993 to 2006 he built a plant nursery called Fragrant Flora on the Sunshine Coast and founded The Sunshine Coast Botanical Garden. All of this was an outgrowth of his photography in gardens around the world based on his research of the elements inherent in paradise myths that he did in the 70s and 80s. In 2006 he moved from Roberts Creek to Vancouver and devoted himself full-time to his artistic practice. His 2010 exhibition at Presentation House in North Vancouver was notable for showing his 1970 ceramic mural “Artifact” on the wall for first time.